South Carolina politics long have been considered a cess pool that could rival Chicago or Louisiana in terms of dirty tricks. A skim of recent juicier national highlights range from accusations in 2000 that then-presidential candidate Sen. John McCain fathered his adoptive Asian daughter out of wedlock (saying she was instead the product of a black prostitute) to rumors just a few weeks back that not one, but two, men claimed to have had affairs with state Rep. Nikki Haley.

Yet, even against this backdrop Haley – a historic figure in many ways – succeeded this week in her quest to secure the GOP nomination for the governor's mansion after a contentious run-off, beating her opponent like he stole something.
There’s a broader context to place this story, one that received some considerable hype beforehand, but whose culmination was lost amid the McChrystal flap.
One, she’s a woman, and this country, while advancing, has yet to elect women to office in proportions equal to their population. You don’t have to be a woman to represent one, but having actual experience with things sometimes beats plain empathy. Ask any woman who pops Midol or who has birthed a baby.
Of the governors serving the nation and its territories, just a half dozen are female – Jan Brewer of Arizona, Jodi Rell of Connecticut, Linda Lingle of Hawaii, Bev Purdue of North Carolina, Jennifer Granholm of Michigan and Chris Gregoire of Washington. In fact, Haley would break the tie and add the fourth female Republican governor to the mix, should she be successful, and odds are good that she’ll take the win.
Two, she’s young. Even among her would-be female colleagues, she’d be the only under-50 member. At 38, she’d bring a perspective shaped not by Baby Boomers and their incessant culture wars, but that of the Sesame Street Generation, with a global twist.
Three, she’s not white. Repeat: she’s not white. In South Carolina.
In the whole of the south, there have been two nonwhites elected governor since Reconstruction, the first being Virginia’s L. Douglas Wilder in 1989. With the whole entrepreneurial, up-by-the-bootstraps story Republicans love to tout, expect every effort to catapult her to the top of the media heap upon securing the governor’s mansion. Louisiana Gov. Bobby Jindal’s star dimmed after his disastrous delivery of the GOP response to the president’s early 2009 address to a joint session of Congress. Former Alaska Gov. Sarah Palin alienated as many as she galvanized during her run as the GOP’s 2008 vice president candidate, reveling in winks and wiles during public presentations . Haley represents the best bet for GOP boosters who have been crossing their fingers for a Great Brown Hope to counter the Man of Hope and Change.
Haley is far from a Repuba-liberal. Her platform is run-of-the-mill GOP: fiscal conservative, anti-abortion, pro-gun, anti-Obama-led healthcare reform. But she’s also pushing more statehouse transparency. Her stance on immigration (no undocumented folks desired) is tempered by a sober view that since industry plays a role, it should also share in the pain and punishment, not just the people scrapping for a better way of life.
Her conservative bonafides won her Tea Party allegiance, for better or worse. That she has the backing of Palin and FreedomWorks also may raise eyebrows. Where she’d wind up on the partisan spectrum upon entering office is yet to be revealed.
Some have hailed Jindal and now Haley for not focusing on “identity” politics, but instead furthering “conservative” values. Of course, that has never stopped even fellow “conservatives” from injecting “identity” politics in the mix. If elected governor, it’ll be interesting how she’d work with fellow Republican, state Sen. Jake Knotts, who referred to the would-be governor as a “raghead” – not to mention fend off additional rumors, slights and slurs from her own party due to her difference.
Just as interesting is whether in office she’d simply smile and present a you’re-so-Anglo-I’m-so-Anglo front or if this daughter of immigrants will speak honestly about what it means to rise above the taunts and obstacles hurled her way, just because. She says she’s focusing beyond points of gender or ethnicity, but it hasn’t stopped the former underdog from using them to her advantage.
She may be a woman. She may be Indian-American. But it’s clear she’s a politician with chops.
Posted by Unknown at 8:08 AM 1 comment:

Stan’s so not the man, facing the can

Four-star general displayed plebe-level judgment
in openly criticizing Afghan war plan and planners
Given that the Obama Administration had already given Gen. Stanley McChrystal a pass previously – actually, two – for being “outspoken,” the only defense he could possibly offer the president when he comes into the Oval Office to meet with him tomorrow and explains his comments in the July 8 issue of Rolling Stone is insanity. From heat stroke, induced by the Afghan sands.

Yeah, that’s it.
Or just end the madness and offer his resignation. You can only beef at your boss but for so long before you meet the tail end of a door knob. 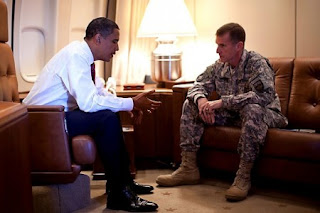 The scathing assessments of civilian handling of the war in Afghanistan – the war Obama installed him to oversee, despite a cloudy past – provides a contemptuous view of this White House by both the man and his empowered staff. Why his press aide Duncan Boothby didn’t pull the plug as this story was unwinding is still not explained, which may be why said aide resigned.
That McChrystal ran his mouth – and even more so, allowed his inner circle to blab off the cuff – is fairly surprising, even for a guy known to thumb his nose at authority. After all, military life is the ultimate homage to authority, and McChrystal is neither a newbie nor a dummy in this arena.

Including his West Point tenure, he’s closing in on 40 years in the service. He has a bachelor’s, two master’s, and studied at both Harvard and the Council on Foreign Relations. And he’s been hailed as brilliant.
So what gives with the general’s sudden diarrhea of the mouth? I’m sure the president is eager to find out.
There have been arguments to can McChrystal for his ultimate dis job, as well as arguments to keep him, particularly since Obama already has replaced on general on the Afghan front.
Of course, the big winner in all of this is Rolling Stone magazine. Long known as an upstart in the world of “serious” journalism, the magazine had lost some of that luster in recent years. Modern hipsters saw it as "so ‘90s." This scoop – an opportunity of time and place – not only left competitors from erstwhile publications such as Time, Newsweek, The New Republic and the National Review in the dust, it also pushed its name to the fore of headlines worldwide. Take that, Financial Times! A half-naked Lady Gaga and a half-embittered four-star general in the same issue! Anybody else hear registers going ca-ching?!
Article author Michael Hastings for one can’t be saddened by the firestorm his piece has wrought. Far from a fan of the war (he chronicled his emotions after his fiancée, an aid worker, was killed in Iraq), he’s also far from a newbie. He took full advantage of the access he was granted to McChrystal – and the result no doubt will wind up as a case study for public relations management courses for years to come. After all, Hastings, a former Newsweek staffer and a GQ contributor, wrote the piece in classic Rolling Stone style – brash, pointed and salacious, complete with all curse words possible for extra emphasis.
All the wrong light for any PR professional worth the salt. And just more salt in open lashes this administration is taking from every direction and corner of the world, at home and abroad. Pick a crisis and multiply it. Welcome to 2008 Hope and Change colliding with 2010 Obstinateness and Reality.
Then again, BP might end up being the secret winner. Surely Tony Hayward and his BP brethren are breathing a sigh of relief to be out of the public flogging circle, if only for a moment. More than likely, it’ll be a brief one, with U.S. District Judge Martin Feldman reversing the Obama Administration’s issued six-month ban on deep-water drilling, calling it “overbearing.”
Never mind the deep goop that continues to strangle the ecosystems of the Gulf of Mexico due to the Deepwater Horizon oil spill on April 20. For now, Washington’s eyes are fixed on the deep goop that McChrystal finds himself.
Wondering your view. This browngirl, for sure, will be staying tuned.
Posted by Unknown at 3:23 PM No comments: