A recent and unseasonably cool August day found yours truly in Bed, Bath & Beyond and catching not just a sale, but glimpses of a lost memory. Nervous moms with teens in tow traipsing the aisles, plucking items to make the transition from bedroom to dorm room comfy and less traumatic. Sale signs announcing the best deals on bean bags, sheets and, of course, the ubiquitous foot locker – standard requirement at one time for incoming freshmen at Florida A&M University.


Since I’m no longer mistaken for one of those freshly-minted college-bounds, nostalgia rose watching the scene, remembering the role I played with my mother as we prepped for my journey to Tallahassee. There was eagerness and anxiousness about discovery.

During my time at FAMU, two figures were seminal. One was our brilliant and gregarious president Dr. Fred Humphries. Standing a good 6’6, possessing advanced degrees in chemistry and a voice that could be mistaken for God’s – even when sounding tipsy at football games – he made a quick impression on the hordes of us who scurried across campus, in search of knowledge and keys to brighter worlds.

The other was smaller in physical stature, but not so in presence, and that was Dr. William P. Foster. 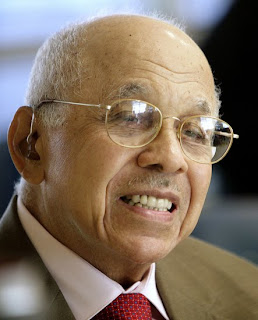 For most colleges of note, football tends to be the celebrated focal point for students and alumni alike. At FAMU, it’s all about the Marching 100, the band that has performed before audiences at home and abroad to dropped jaws and deafening roars with each show. From college classics to TV commercials to Super Bowls to America’s representatives at the 200th anniversary of Bastille Day in Paris, the band has been there, done that. President Obama was just the latest graced with an Inauguration Day presence.
I used to wonder why people who knew me for years had started asking what instrument I played when I told them of my college decision. When I landed on the Hill, I understood. Without a hint of humility, longtime game announcer Joe Bullard would affirm fans and put visitors on notice, “The Marching 100. Often imitated, never duplicated. Like Coke, it’s the real thing.”
The band’s precision twists, twirls and splits make for eye candy – and unparalleled grace through fitness. Ask any member of the band about the ability to hold a “90” and an instrument for extended periods. But as stunning as the choreography tends to be, that it is twinned with outstanding musicianship and rigor in performance propelled FAMU’s name to added heights.
All of that was borne from Foster.


There was a reason he was known as “The Law.” There had been a musical team before his arrival. Foster made the “100.” He revolutionized the college marching band, and his 1968 manual became the bible for baton wielders nationwide. High school students – and their band directors – clawed at the chance to learn from him during summer camps and workshops. Band bystanders would wander down to the hollowed practice grounds known as the Patch and watch that motley crew of players rehearse every step and chord. 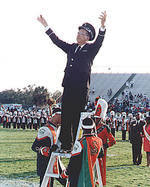 To be a member of his band meant to be dedicated, gifted – but not necessarily black, or male. If you could deliver on his demands, you were in. His vision never wavered. The focus was sound and fury, from 1946 when he arrived until 1998 when he retired his wand. No “sparkle girls.” No distractions.

Early in my reporting days, as a FAMUAN staffer, I once tracked down stories of hazing within the band. The actions grieved him. Foster insisted on discipline, but said he abhorred the rituals that came to light. He found talent without character distasteful, as much as showmanship without substance.


When Drumline was in production, it was known that while modeled off band heritage like that of the "100," FAMU would not participate. It was not going to pull that many students from their studies for that length of time – to lose to a fictional college. Rattler Nation wouldn’t have it. Neither would Foster.
Being there as he wound down his conducting days was an added treat to the FAMU experience, like watching living history. You could see the reverence his band had for him, appreciate how the music department he dominated cultivated artists ranging from Nat and Julian “Cannonball” Adderly to Wycliffe Gordon. Countless smiles would pour from the band room when he closed out the final home rehearsals with one phrase and praise: “I think the ‘100’ is ready.” 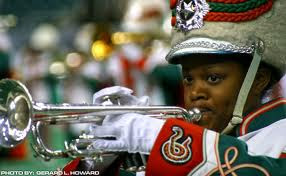 You never had to march in the band to feel the pride that swelled in your heart with every show. You didn’t have to fret if the football team was getting clobbered on the field. As a Rattler, you just hold your breath and wait for the hundreds of young men and women in green suits, orange capes and white hats to wind onto the field. Then, it's lights, camera, action. The performance of a lifetime. Every time.
It was the joy of fall at FAM. It was a gift bequeathed by Doc Foster -- a legacy to treasure for generations to come.
Posted by Unknown at 2:14 PM No comments:

It’s not uncommon in my neighborhood to see a woman draped in black, from head to toe, with all but her eyes revealed. My aunt jokingly dubbed such women “spooky Muslims,” because in some cases they do, in fact, appear to be dark apparitions, floating – sometimes wobbling – down the street, usually with a child in tow, sometimes a few feet behind a man. And he may have on flood pants under a dress-length tunic, with a scraggly beard and a kufi on his head.

Her comment may seem insensitive until you consider that my aunt is a faithful, practicing Muslim, one who has raised her children in the faith. In fact, in the United States, blacks make up about a third of the nation’s Muslims by conservative estimates – and scores of females in that mix do not accept the spooky garb as uniform.

One person’s Islam is driven by sincere belief in instruction from God; another’s, by man’s sincere lust for power. Too often, the street-level interpretation seems to be more about propelling a man to a position of authority – understandable given the damaged psyches of some who adopt it after a prison bid or some other quest for grounding – than about God and peace in the world. I have yet to find in the Qu’aran a misery test for women to prove faithfulness. Yet, that often seems to be the order of the day among the spooky set. Especially given this sweltering heat.

And if black people still cast wary eyes toward loved ones in the faith, what’s to be expected of the majority of the country whose introduction consisted largely of deranged men claiming Allah while bent on a path of destruction one sunny September day?

It’s a question that has been swirling around my mind since the latest outbreak of anti-Islam fever has broken out nationwide, sparked by the concept of building a mosque and Islamic gathering center near the site of the former World Trade Center, hallowed ground in the United States since the 9/11 terrorist attacks of 2001. 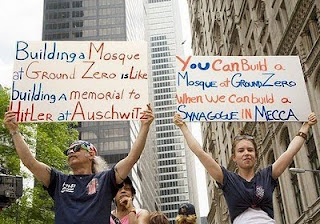 There were people of all colors, ethnicities, and faiths murdered that day – including Muslims. Those facts often are glossed over in the anti-Islam hysteria, one fanned, sadly, by opportunists within the GOP. Some perspective, though.

It’s doubtful many would howl about placing a Mennonite Church near the Oklahoma City National Memorial and Museum, where the Alfred P. Murrah Federal Building was felled. Yet that faith spawned a pastor, Robert G. Millar, who went left and began espousing unadulterated hatred and whose doctrine took disciple Timothy McVeigh to new heights of infamy.

Likewise, eyebrows would arch at the thought of shuttering celebrations of Mass at any of the 22 Roman Catholic parishes in Birmingham just because that faith was the grounding for the Rev. Donald Spitz. He’s the brain trust and spiritual guide of the Army of God, whose anti-abortion tear in that town, and across the country, has claimed the lives of medical professionals. Spitz also has inspired followers like Eric Robert Rudolph, whose crimes include bombing the 1996 Olympic Games in Atlanta.

No one blamed these religions for these twisted interpretations. Yet, scores stand ready to scorn all of Islam and its adherents due to the inflamed madness of a few.

“I do believe everybody has a right to freedom of religion,” Diana Sarafin told The New York Times. “But Islam is not about a religion. It’s a political government, and it’s 100 percent against our Constitution.”

Uh, no. That’s not what the Qu’aran is about, any more than a demand for spooky Muslims. Or any more than the Torah or the Bible.

Part of America’s irrational fear of “Islamo-terrorism” comes from the blatant ignorance about what Islam is – and isn’t. In that vein, a center dedicated to education and understanding – what has been proposed for the Cordoba House at 45-47 Park Place – is an apt prescription.

Muslims – simply meaning one who submits to God in Arabic – have as many different cultural codes they follow as part of their faith as do any Christian. What usually remains consistent is that peace is premier in Islam, much like most world religions. How one manages to achieve that tends to be the area of consternation, and the ground ripest for pollution. No one faith has cornered the market on sinners or saints – something we’d all do well to remember.
Posted by Unknown at 1:17 PM No comments:

A recent hit by your friendly-neighborhood browngirl

So sorry. Been caught up so that I neglected to post this little nugget from yours truly that posted on BlackAmericaWeb.com regarding President Obama's birthday, our Leo-in-Chief. 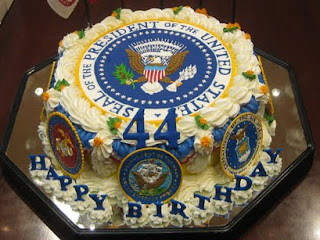 It's cool to take a break from the ultra-serious to having a little fun here and again. But I think I'd like to report live from the 50th birthday party shin-dig.

Here's hoping that the president had a great birthday! Did you join the lift-his-spirits campaign and wear any Obama '08 gear to help celebrate?
Posted by Unknown at 1:19 PM No comments: