A debate on voter ID legislation: two ways to join the conversation

For the better part of the past decade, bills have been floating around state legislatures across the country to stem a supposed tide of "voter fraud." That's the term that's bandied about whenever all is not right in the world, or whenever there is a swell of Democrats entering or retaining public office, take your pick.

The howls revved up once the "Motor Voter" law passed in 1993. All that dangnab access to the ballot box! To hear some lamentations, you could almost hear sighs and yearnings for the days of the poll tax. 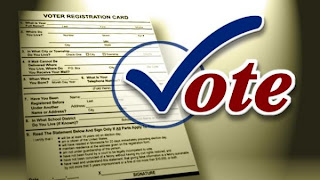 Since the GOP tidal wave of 2010, efforts to enact voter identification and other potentially suffrage-restrictive bills have stepped up, double-time. Some are more restrictive than others, but it's always interesting that zeal for such efforts arises close to when major elections are nearing, despite protestations to the contrary. Republicans do their credibility no favors in this arena, having campaigned to restore and advance jobs, and legislating on everything else but since taking oaths of office.
For a recent take on this movement, read a recent piece by yours truly, and offer your perspective -- either here or on PA2012.com, the destination for news about Pennsylvania's big 2012 races.
Posted by Unknown at 2:57 PM