The joke is that Pennsylvania is Philadelphia, Pittsburgh and Alabama in between. Sometimes it’s hard to dispute such characterizations in looking back at last week, where much of the South as awash in celebration over the “bars and stars” – and some in the Keystone State are part of the hoopla.

Confederate forces invaded southern Pennsylvania during the war; some areas, like York, just rolled over. Gettysburg, a one-time bloodbath of soldiers from both sides, has its own swath of Confederate celebrants amid the area’s history buffs. This proud sprinkling claims the righteousness of our infamous insurrection and some are among the Sons of Confederate Veterans. 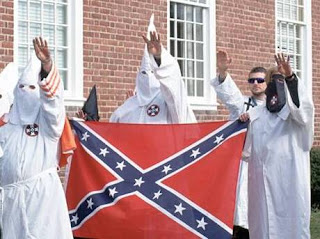 These ardent believers characterize the Civil War as “the preservation of liberty and freedom," "the motivating factor in the South's decision to fight the Second American Revolution.”
That freedom line is always worth a chuckle, considering that one of the factors for waging the insurgency was to retain the right to enslave others.

It's hard to see the "heritage" and not hate, given who often give claim to the Confederate flag, just like it’s hard to look at people in those uniforms without thinking of “strange fruit swinging from the trees,” lashed backs or other miseries of black ancestors so summarily dismissed during these celebrations. Added salt for these wounds is the proliferation of Confederate revisionist history about the era. Unrepentant horrors visited upon a people equal to hate for many.
So the fact that this political swing state has a healthy number of folks waxing romantic about preserving a system that insisted on keeping human beings as chattel in chains – “states rights” – serves as an apt backdrop for the latest findings from the Southern Poverty Law Center.
Nationwide, hate groups have topped 1,000 this year – including neo-Confederates.
Pennsylvania’s share of this dubious list is 36 by the nonprofit’s tally – higher than Ohio, New York and West Virginia, but second in the region to New Jersey, which is home to 47 such groups. And there’s great variety of revulsion-inducing activities, from racist skinheads to neo-Nazis to anti-Muslim types to your garden-variety Klansmen.
For many of these members, black people should have never left chains – or African shores. And we won’t get into their love of Jews or other non-Christians.
Some would say the rise of a President Barack Obama has helped fuel resentment among white males stuck in a certain social class, the backbone of membership in such groups. SPLC reports that fringier elements from the conservative front – think “patriot” movements – have helped further frustrations that usually arise during economic downturns.
On the flip side, hate seems to be growing as an equal opportunity activity. At least nine of those identified groups are listed as radical black separatists, proving hate, like stupidity, comes in all colors.
Posted by Unknown at 8:07 AM