As D.C.’s debt ceiling debacle drags on, the popcorn has been crackling in time for the latest comic relief: Tim Pawlenty vs. Michele Bachmann. 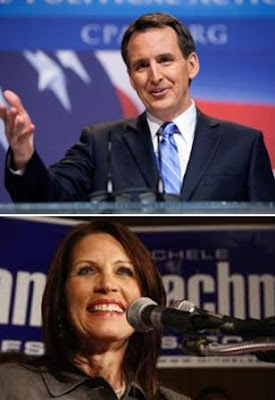 In some respect, it’s a train wreck that doesn’t deserve the attention. In all honesty, it smacks of desperation by the Pawlenty people to remain relevant, because he's not wowing them in the polls – any of them. This is despite having led Minnesota, a decent-sized state, as governor, despite having declared his intentions early and despite all that gosh-darned earnestness. No one is taking this suitor. He can't even break into double digits.
Pawlenty almost had higher name recognition when he first came off as a mostly moderate Republican who would defend his values on The Rachel Maddow Show. The good-natured but firm sparring with the rising liberal cable-show commentator puffed up his stock. Then, like the housing market, it all collapsed.
He was dwarfed by crazy.
Not just normal, run-of-the-mill crazy like Newt Gingrich or the dogged quaintness of the near-eccentric U.S. Ron Paul. Or even decidedly disgusting digs by Herman “Can’t-stand-Muslims” Cain, the former  Godfather’s Pizza CEO trying to out-black the president and out-bigot his opponents in this GOP mash up.
Nope. Pawlenty got played out of position by a fellow Minnesotan – straight-outta-Stearns County silliness in the form of U.S. Rep. Michele Bachmann, self-anointed Congressional tea party leader.
The man who won early buzz as a strong potential rival to Mitt Romney can't get it going, but in swoops the woman who swears the Founding Fathers “worked tirelessly until slavery was no more” (just as soon as they got finished reaping all the benefits of all that free, lash-driven labor and sanctioned rape; see "Washington, George" or "Jefferson, Thomas"). She's running second only to front-runner Mitt Romney.
Panicked Pawlenty people must have urged him to stiffen his rhetoric, add some sharp right turns to his speeches. Team T-Paw removed that renowned Minnesota Nice from the playbook and launched our lad into murky mud-slinging waters.
President Obama was the easy target. But then Pawlenty’s slings were lost amid the dozens of arrows slung by his 12 – or 16, or 24, but who’s counting? – fellow GOP presidential wannabes. And Romney just played it cool and quiet, bobbing along, unfazed.
On a pivot, Pawlenty changed strategies, walking right up to the door of attacking Romney at the first full GOP debate . . . and like a kid caught on the steps during Mischief Night, slunk back. So ended Round One.
Clearly that devil on his shoulder was no match for Minnesota Nice.
Round Two. Pawlenty got back in his corner. He shook it off, drank from the Courage Carafe and opened an offensive on the opponent he most needed to bring down . . . which was Bachmann. Using migraines as a weapon.
Yes, migraines.
Not her lack coherency – despite numerous examples, from distortions on monetary policy to basic American history. The Daily Show with Jon Stewart’s writing team actually should pay her for the material she readily has supplied.
Nope. That would come later. He first inferred that she may not be fit to be Commander in Chief because of reported vicious headaches. And as has been his pattern, he walked that back, calling it a “sideshow.”
Then came Round Three, leading off with criticism of her lack of experience.
Maybe he thought he was taking the path of least resistance. Or that she would stand still as he decided which way to try and take her down a notch. Maybe he expected her to practice Minnesota Nice, too.
Not.
Mama Migraine came roaring back. And that was just the beginning of his headache.
There’s fear that the comments could be read as a sly sexist wink, since female migraine sufferers outpace males. What next? Midol Michele – can we trust her at 3 a.m.? Boom! Enter the gender card!
Pundits blasted the blunder for what it was – at once spineless and bland, making it an apt T-Paw faux pas.
There is that maxim that there’s no such thing as bad publicity. If Pawlenty chats up Newt Gingrich, Man about Town and Tiffany’s, he'll learn that the sages lied. This kind of summertime stupidity is not how you want your presidential campaign defined. Not unless you’re planning to start pitching for Excedrin.
Regardless of the glint of promise that shimmered early on, Pawlenty keeps tramping down the wrong road. Yes, it's early. Six months in politics is like two minutes in football. But if he can’t get a grip for those critical caucuses in Iowa, with conservatives ready to launch the sails of the next GOP contender for the White House, he can pretty much kiss it goodnight. And probably only on the cheek, because he won't be making it to second base.
Forgot to mention Bachmann’s birthplace. It's Waterloo, Iowa. Heard she's planning quite the homecoming.
Posted by Unknown at 12:01 AM