On Murdoch: In defense of a First Amendment rapist

In no society is the arrest of journalists a good thing. And in no society should there be a desire to set such precedent.

While no one is above the law, the tensions between those who would lead a free society and those who choose to protect it via a free press are long standing. Should the former ever gain control over the actions of the latter, the society ultimately loses, because it would compromise our freedom and allow us to slip closer to a totalitarian state. 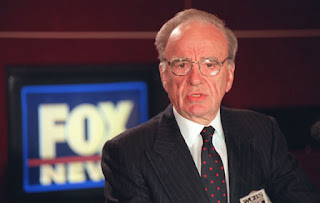 This fact is under high consideration as the NewsCorp. scandal continues to unfurl on both sides of the Atlantic. As arrests of NewsCorp employees mount, including the former head of Rupert Murdoch's U.K. news division, so do disturbing musings about "muzzles" for the media.

It's enough to send shivers up the spines of every notebook-toting journalist, even if it's understandable.

The repulsive nature  -- from hacking cell phones to bribing the police for leads -- of these allegations has put the idea of tightening press freedoms on turbo boosters and may prove to be the greatest crime Murdoch & Co,. have perpetuated on our society.

Along with his apologies to the families affected by this scandal, Murdoch needs to apologize to every actual journalist.

Just as Watergate eroded public faith in politicians and Bush v. Gore shattered trust in the political process, this phone hacking scandal threatens to upend the tenuous balance of journalism, both here and abroad.

After all, trust and accuracy are the currency. Without either, the profession is bankrupt.

For as polarizing as his news outfits and philosophy can be and have been, Murdoch nearly single-handedly has unified forces on both the left and right to reconsider restricting the press. Contrary to popular belief, there IS a code of ethics for actual journalists, much like in other professions. While Murdoch's employees appeared to have been rewarded for flouting these guidelines, real journalists abide by them. Their work further cultivates our democracy, maintaining its vibrancy and our collective and guaranteed pursuit of life, liberty and happiness.

Silencing dissenting and distasteful speech always seems justifiable in the moment, but in the main, it's a dangerous practice of thought control exercised by despots and dictators. The First Amendment  protects even vile speech -- including things uttered on FOX News-- to secure political choice and free will.

With little doubt, Murdoch, who has built himself into a near oligarch through early and decades-long investment in cross-platform media ownership, is far from a sympathetic character, in the United States or in Great Britain. Through his global conglomerate, the plucky Aussie has flexed a steel fist that often sent politicians cowering and grabbed power and prestige through fear for decades.

Domestically, that reputation solidified with each screech and screed from FOX News. Its inflated and cartoonish contributions to the nation's political discourse has led it to be Public Enemy No. 1 when speaking of the coarsening and dumbing down of the culture, aided by a stable of blockbuster but mind-numbing cultural fare such as The New York Post and American Idol.

In acquiring the stately Dow Jones Company and with it, The Wall Street Journal, in 2007, Murdoch sought to buy a level of American sophistication and respect his tawdry and tacky tabloids -- print and broadcast -- could never afford him. The distasteful and illegal actions of those of his employ who helped plump up profits with their reckless disregard have eroded those efforts and set loose termites on his empire's ebony walls.

Let his punishment manifest in a pariah-esque reality and demolished stock returns. Let the journalistic abusers pay fines for their indecency and be banished to a Janet Cooke-like netherworld. But let the press be.

As always, wallets should decide winners and losers among the Fourth Estate -- not legislators.

Else, unchecked, the zeal of Murdoch opponents could incur unintended consequences for journalists everywhere, bringing to mind the prescient words of Protestant pastor and philosopher Martin Niemöller:

First they came for the Socialists, and I did not speak out –
Because I was not a Socialist

Then they came for the Trade Unionists, and I did not speak out –

Then they came for me – and there was no one left to speak for me.
Posted by Unknown at 3:11 AM