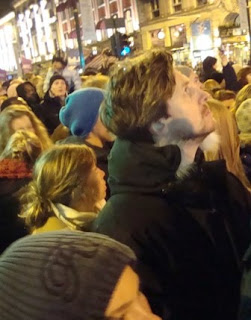 Once the crowds in and around the Oslo City Hall dispersed, you would think there would be a moment to kick back. You would be wrong. There are still reactions to collect, stories to file, hopefully food to eat, and not necessarily in that order.

One of the customary things for the Nobel Peace Prize laureate to do after his or her lecture is to give a goodwill wave to the assembled masses who have come to support his or her efforts.

Reading the local press, and even in interviewing the occasional Norwegian, you wouldn't think too many folks would want to participate in such an event this year, given the "snubs" they've suffered from President Obama.


"His getting the award was  just a farce, and it's a shame on Norway," said Martin Bugge of Oslo, who was among the thousands outside along with his girlfriend, Lill Eskildsem, who was clearly more of a fan.

Yeah, some folks still haven't gotten past the fact that he won the prize.


But if you assumed such feelings would dampen enthusiasm for seeing the man, well, you'd be wrong.

Even Bugge at first tried to say it was all his girlfriend, that's she was the reason they were out there. Then he finally broke down the truth: "I'm here, because . . . I'd like to see him."

Just when you thought American had cornered the love-huh? relationship with the president. 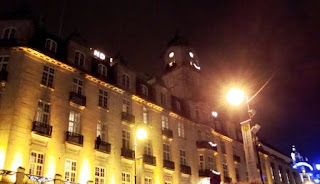 This was a night that drew a pointing, posing, chattering multi-ethnic, multi-lingual melting pot assembled outside The Grand Hotel, the resplendent 135-year old palatial dwelling for traveling dignitaries and chi-chi alike. For the hours Obama spent in Oslo, the Grand would play home. It wasn't just starstruck kids, out there,either, though there were plenty of the K-12 and college set around.

No, you had a respectable number of Baby Boomers as well as those above and below that scale on hand. And nearly everyone was armed with a camera phone or camcorder. Friends snapped pictures of each other outside the hotel. Festivity danced in the air like the barren twig branches of the young trees around. Any movement near a window or door opening drew "Oohs" and "Ahs," even if they came before the scheduled 7P Obama sighting. 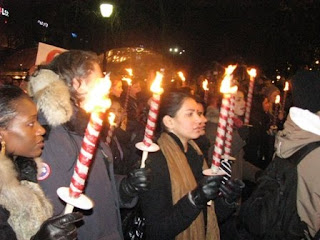 As hundreds took to the streets for the annual candlelight vigil for peace (photo courtesy Phillip Louis), for more than an hour, a couple thousand people, for their own reasons, gathered outside and waited for the president to come out and play, when they weren't running over yours truly in attempts of getting the best spot. The clock hit 7P. Then 7:02P. And then Obama did come out to play. And he brought a playmate -- the First Lady, looking her normal stunning self. Of course, the reaction is what you'd expect. What? You didn't expect the crowd to whoop, whistle, cheer, and wave? 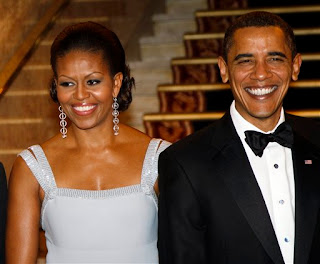 In a mere 90 seconds, he melted about every heart out there, even those crusty with cynicism. Of course, it helps to have a Weapon X on your arm, too.

(Photo of the Dynamic Duo courtesy of AP Photo/Scanpix)
Posted by Unknown at 7:27 PM