Did I EVER rock out last night! Woke up around 12:30P local time, far later than anticipated. Didn't come to until I heard a knocking at the door. It was my guide, Yanique, who was shocked I was still asleep. That up for nearly 24-hours thing didn't do so well with my body. She patiently waited for me as I hustled to shower, dress, and roll out the door to pick up my press credentials.

The first hotel was not the right hotel for the Nobel press credential, but at least now I know where the press office for the Nobel concert will be. Hustled in a cab to the correct Radisson. We could have walked, but I was concerned about the time, because we had a press gathering at Springbok Cafe starting at 4P, and it was already after 3P.

Got my credentials. As we headed to Springbok, the deafening roar of military copters drowned out most conversation, and anything else. The whir of blue sirens zipping by and the constant hovering of the copters alerted to the obvious: President Obama was nearing. People stood in their doorways and paused in the street as the two copters swooped and circled lower and lower before the palace grounds. 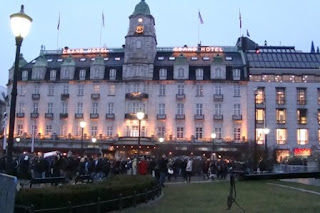 Obama is staying at the Grand Hotel (l.). The security has gone up pretty fast and the crowds of onlookers have thickened.

Made it to Springbok, a gathering my host, Phillip Louis, arranged. Great gathering of folks from Baltimore, Virginia, New York, Germany, Iceland, Nigeria, South Africa and Norway. Can't wait to sift through the notes to reflect on the dialogue. More coming later.