Made it to the concert -- with MINUTES to spare! Phew! 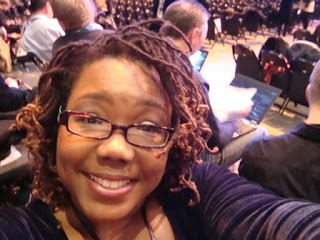 When they said the Nobel Peace Prize Concert was the hottest ticket in town, there was no kidding around on that one. The masses descending on the Oslo Spektrum were impressive. And everyone was dressed. Made me happy on a last-minute whim I tossed in a black velvet dress. When in doubt for formal affairs, go black. When traveling, go velvet, or at least a heavy jersey knit; fewer wrinkles!

I truly was panicked I wasn't going to make the venue on time. After touring Parliament, I hustled to a close-by deli to save my life, because I had not eaten up until that point, which is a general no-no for this browngirl. Spotting a Deli de Luca, I sped there to snatch up a calzone, some chips, a fish cake (national staple), and a San Pelligrino orange soda. That tallied about $22. I did mention this joint is pricey, right?

Now this was the third Deli de Luca I had visited since being in town, so I kind of knew the drill. Until ol' boy asked to see ID after I swiped my card. Now, this was the first time I had been carded. So I show him my passport. Then he wants the passport number. The ONLY time this happened. Now because he was brown and I'm brown, I just wondered whether I was getting a reverse profile or he was trying to hustle my passport number on some black market.I was probably just being paranoid and prejudiced, but I didn't like the feel or his attitude. Maybe he didn't really think I was American or something. Anyway, hunger won so I acquiesced. Dude was probably just doing his job the right way, and everyone else was just lax. I'll leave it at that.

Caught the train. Returned to the apartment. Did the Daily News web chat. Changed clothes. Headed back out, feeling confident. 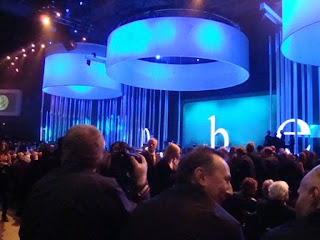 Made it with seven minutes to spare! Yay! Seats were seven rows from the stage, in the press area. I didn't even mind the monster camera lenses in front of me, or the Jurassic Park-looking video cameras that swooped by every so often getting just the right angle for the folks at home and people relying on the jumbo screens.

I was a little bummed that (a) my pearl necklace broke and (b) my camera battery died, and I could have recharged it while I was doing the web chat. I did manage to get a few shots off before Betsy went bye-bye.
Posted by Unknown at 10:24 PM