In from the rain - arrival at Oslo City Hall 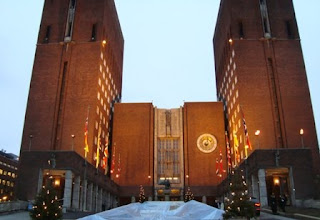 The grand Oslo City Hall. The wait in the rain in the press line was not as bad as it could have been. We moved through fairly quickly, and I passed the time speaking with Brandon Lewis, a Long Beach native who has been living in Scandinavia -- first Sweden, then Norway -- for the past eight years.

He wasn't able to campaign at home, but he was among the first to send in a donation from Norway. He's geeked that he will shortly share a room with the president.

He was elected vice chair of Democrats Abroad Norway when President Obama was nominated, but he has been a supporter long before Iowa, when Obama's viability turned to reality for many. "I was a supporter of Obama even before black people were," he said, then laughed.

The Iraq War, the wrong war, in his view, disillusioned him. Lewis hated seeing how divided the country became, and even worse, that its ideals were being choked by fear. It made the decision to join his Norwegian girlfriend abroad that much easier. Switching from a finance and business background to IT didn't prove too challenging. He has found work with a Scandinavian oil company.

But what he found more inspiring was Obama. Never had he involved himself in politics, assuming that it was all dirty, all the time. "Obama showed that you can play fair and still win, and that was inspiring to me," said the 35-year-old.

When there were opportunities to go negative, he said Obama stayed in his lane. With America's standing abroad frayed on a number of levels, Obama has renewed faith worldwide. Despite ongoing controversy about whether the Nobel Prize has been awarded prematurely, Lewis is convinced it was the right move.

"The prize has been given to people before to reward their aspirations and where they are trying to go," he said. "This is no different. And I'm proud to represent him here."

Lewis has been so taken by the spirit and character of the man, the campaign, and the presidency that he has the iconic rising "O" symbol tattooed over his heart. "To remind me that we can have hope again," he said.
Posted by Unknown at 4:47 AM