President Obama's words, rich in texture, imagery, and nuance, are still reverberating in my ears. The acoustics in the hall were pretty awful from up in the balcony, so I made use of the interpreter headsets they offered. Far clearer. 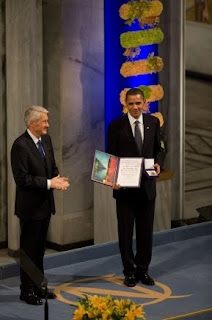 I was scrambling to record his speech as it unfolded. The White House press staff was only making live copies available to members of the White House Press Pool. Good thing I have connections!

Anyway, here is the text of the speech, in case you didn't get a chance to truly digest everything in the first sitting. I know I didn't. Obama's major orations tend to be like that. It's like a musical album; you need to tune in the first time for the overall feel, then for the syncopation, then the melody, then the lyrics, and then hear the entire composition again, in totality, for real analysis and assessment.

Big ups to Pete Souza, the incomparable chief official White House press photog. He's been working his behind off documenting this dude! This is a Souza photo; the picture, not the band instrument!
Posted by Unknown at 6:24 PM