A Call to Action: An exhibit preview at the Nobel Peace Center 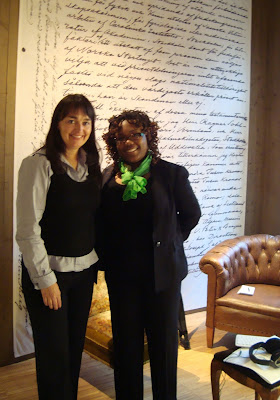 Liv Astrid Sverdrup (l.), project director at the Nobel Peace Center, gave me a backstage tour of the forthcoming Obama: A Call to Action exhibit. It opens officially on Friday and runs through August 2010.

She and her team had eight weeks to translate a concept from vision to reality, something that both gave insight on this year's Nobel Peace laureate and an answer to critics who charged it was a premature, if not inappropriate, selection.

Fusing the life,legacy, and works of Alfred Nobel and President Barack Obama, the exhibit shows intersections and elucidation on the three points of criteria from Nobel's will on which the committee focused in making its selection:

The show begins on the ground floor with oversized photos of President Obama, from the inauguration to life in the White House, including a favorite with little Sasha sneaking up on her dad in the Oval Office. With interactive features, such as picking up an old-fashioned phone from Nobel's "study" that rings a BlackBerry in Obama's "library," visitors can place themselves in the shoes of both men, as well as join the robust discussion of what it means to forge and secure peace in our time.
Posted by Unknown at 6:57 PM